Wisconsin’s Department of Workforce Development is reporting on its FAQ that is will take several weeks to receive guidance about the unemployment provisions in the CARES act and then probably another several weeks before those provisions can be implemented.

Note: The Legislative Fiscal Bureau has already released its analysis of the CARES act as well as the earlier Families First act. This analysis notes some key provisions of these laws that DWD has yet to address, notably employer experience rating for pandemic-related layoffs.

Wisconsin may not have the time to wait. The Economic Policy Institute reports that nearly 20 million are expected to be out of work soon. Current — and shocking — national unemployment figures released today support this prediction. Indeed, after two weeks we are already nearly a third of the way there to 20 million. NELP reports:

This week’s unemployment claims report, which reflects last week’s claims, is up to 6.648 million, up 3.341 million from last week’s historic—and shocking—initial claims report. This is again a truly unprecedented number. Unfortunately, far too many eligible workers who are trying to file for unemployment are still encountering long waits or can’t connect at all with the state unemployment agency websites. NELP urges states to ramp up their claims-processing capacity as quickly as possible.

The Dep’t of Labor data for Wisconsin is just as shocking: 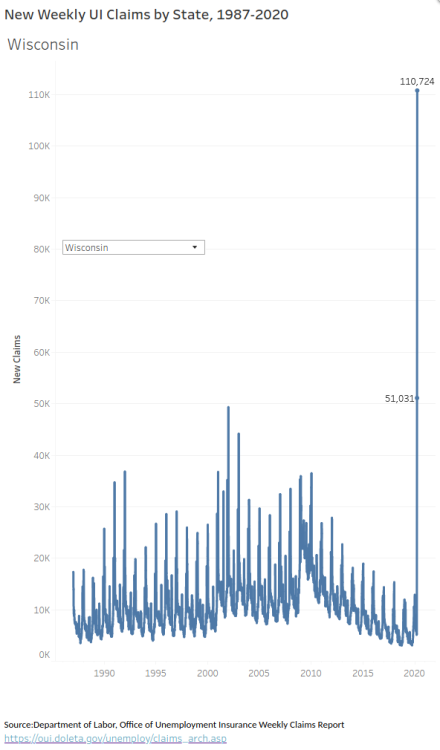 Note: Thanks to Colin Gordon of the Iowa Policy Project for this data and charts.

So, Wisconsin should expect that phone lines and on-line claims systems will continue to be crushed.

Other states are attempting to respond to this onslaught of claims in creative ways, ways that Wisconsin should give serious consideration to adopting:

Note: for a full run-down of what is happening in the state’s in regards to unemployment, see Unemployment Insurance Protections in Response to COVID-19: State Developments.

Finally, employees should be on the lookout for employers attempting to siphon away some of the benefits headed to claimants. Ohio is reporting numerous instances of employers not paying last paychecks and employers trying to avoid unemployment by reducing/zeroing out hours. Wisconsin law requires last paychecks to be paid to employees, and any loss of work because of a lack of work — whether the loss is partial or full and regardless of how the lack of work is labeled — entitles a person to unemployment benefits.