The Marketplace radio show had an excellent feature on May 10th about the changes to unemployment that have occurred since the great recession:

Note: Hat tip to Democurmudgen for this story.

As with Andrew Stettner’s examination of this issue, the focus here is mostly on legal changes to shorten or reduce benefit eligibility.

But, as also obvious in the Marketplace piece, many states have, like Wisconsin, simply made it that much harder to even claim unemployment benefits in the first place. For instance, here are a few of the barriers that now exist in Wisconsin to filing an unemployment claim:

In a state where broadband access to the Internet is universally acknowledged as limited, the barriers listed here are substantial. It is through these barriers that the state discourages folks from even applying in the first place.

To those that say these barriers are an exaggeration, please then point out all the efforts the Department has undertaken to advertise and explain this on-line filing process, to make it more accessible and easier to understand, and to remove the barriers to access (by having job counselors travel to claimants, for instance, rather than the other way around).

The January 2019 news about declining employer taxes was stellar. The May 2019 financial report reveals that the trust fund is in even better shape: nearly $1.9 billion as of April 30th.

At the May 22nd meeting of the Advisory Council, there was a presentation on the health of the unemployment trust fund. An excellent chart in this presentation presents the current situation:

As evident here, the trust fund is at a near record high while claimants’ benefits and employers’ taxes are dropping like rocks down the proverbial well. Two charts showcase how benefits and taxes have markedly declined since 2011 (benefits) and 2012 (taxes) relative to total payroll in the state. 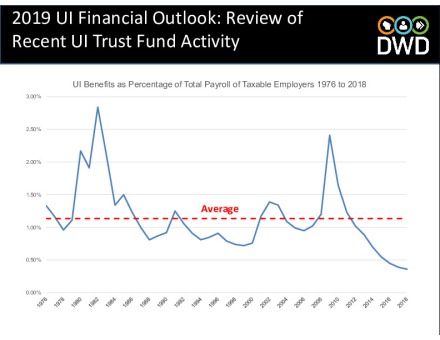 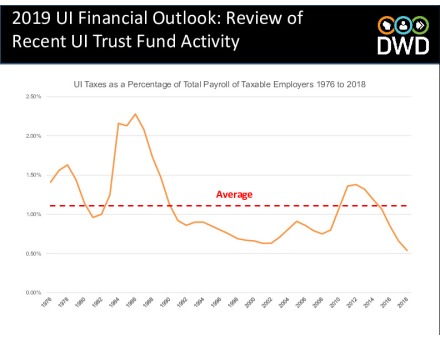 So, what Wisconsin has experienced the last eight to nine years is ahistorical — only around 37% of claimants applying for unemployment benefits end up receiving any benefits rather than the more typical 55% of applicants.

Note: Department personnel continue to remark about how benefit payments are at record lows without offering any explanations or theories for why these record low benefit payments are occurring. As noted in this blog, this problem of record-low benefit payments is not unique to Wisconsin. But, it does seem from this same note that changes in how states are administering their unemployment law disqualifications are responsible for much if not all of this decline. Shouldn’t the Department finally take ownership of its own culpability for what has been going on the last eight to nine years or at least explain why the legal changes and administrative practices adopted under the prior governor to make it more difficult to claim unemployment benefits are somehow NOT connected to this decline in unemployment benefits?

At a minimum, Department staffers need to read Andrew Stettner’s excellent analysis of state unemployment systems and the changes in eligibility standards and application rates describes the impact of these changes and why these changes should be re-examined and most likely reversed.

To understand how healthy the unemployment trust fund actually is, three different scenarios for the future were played out in this presentation.

In other words, these scenarios indicate that the trust fund balance — despite being at record levels — is wholly inadequate given the current size and scope of Wisconsin’s economy. Only a Pollyanna desire for the economic equivalent of sunshine and rainbows to continue indefinitely keeps the unemployment trust fund from imploding.

The current fetish with minimizing employers’ taxes is just one culprit behind this carefree thinking. Economists have begun explaining, that there is no correlation whatsoever between employers’ tax rates and business success. What remains to be seen is what the Advisory Council will do about all these problems: keep current policies and administrative practices in place or begin the process of changing these policies and practices. As many of these simply relate to the Department’s bureaucratic preferences in how it administers unemployment law (and, in numerous places represents a sharp conflict with that law), there is much that can be done immediately to correct at least the unparalleled decline in benefit payments before we find ourselves in the middle of a recession and with no oar available to avoid the waterfall towards which we race.